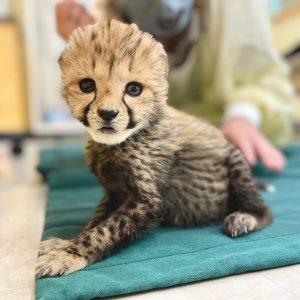 Lone Cheetah Cub from Oregon Settling in at the Cincinnati Zoo

“Rozi” selected as name for the newest cheetah ambassador

CINCINNATI (May 27, 2022) – Cincinnati Zoo & Botanical Garden announced the arrival of a singleton cheetah cub earlier this week and asked for name suggestions.  The cheetah team, which is hand-rearing the cub with the help of the Zoo’s neonate staff, selected Rozi [ROH] + [ZEE] as a good fit for the 4-week-old female.

“We liked Rozi because it means rose (or flower) in Swahili, one of the languages spoken in the cub’s native land, and because she was born in the spring,” said Cat Ambassador Program (CAP) lead trainer Linda Castañeda. “It’s also a nod to the beautiful botanical garden that will be her backyard as she grows up here.”

Cheetah moms do not receive enough stimulation from a single cub to produce an adequate milk supply, so Rozi couldn’t be cared for by her mom at Wildlife Safari in Oregon. The Association of Zoos and Aquariums’ Cheetah Species Survival Plan (SSP) identified Cincinnati Zoo as the best place for the cub to be raised. 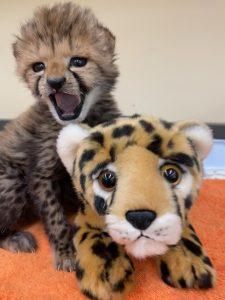 “We have raised all of the 8 cheetahs that are currently in the Cat Ambassador Program,” said Castañeda.  “The first few months are important for bonding and building trust, so we will be with her night and day.  When she’s ready, she will join the other ambassadors and eventually participate in the Zoo’s Cheetah Encounter.”

In addition to spending time with her care team, the Zoo plans to pair Rozi with a puppy.  Canine companionship provides play and socialization opportunities that humans cannot give the cub. The Zoo will share more details about the cub and puppy, when it arrives, on its social channels.

The Cincinnati Zoo and Wildlife Safari are two of only ten facilities that participate in the AZA-accredited cheetah Breeding Center Coalition (BCC). The BCC’s goal is to create a sustainable cheetah population that will prevent extinction of the world’s fastest land animal.