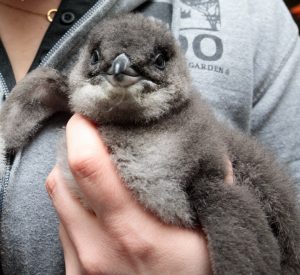 “We name most of our little blue penguins something related to food, so we added “Cup O’ Joe” to the chick’s official name,” said Cincinnati Zoo’s head bird keeper Cody Sowers.  “Cup O’ Joe Burrow has a nice ring to it and fits the theme.”

The 5-week-old chick will eventually wear orange and black ID bands when it moves to be with the rest of the little blue penguin colony this spring.  All of the 30+ penguins are identified with unique colors so keepers can easily tell them apart.

“The chick and the quarterback have more in common than just their obvious good looks,” said Cincinnati Zoo senior bird team keeper Aimee Owen.  “This chick has been a great leader since Dey 1.  He’s always communicating his game plan to the entire team, and the plan is always eating and sleeping. Little blue penguins and QB Burrow are both good swimmers but can’t fly, and they know how to survive in extreme environments – Arrowhead Stadium and the rocky cliffs of New Zealand.”

Visitors will be able to see Cup O’ Joe Burrow when the weather gets warmer.  Joe Burrow is invited to meet his namesake any time that’s convenient!