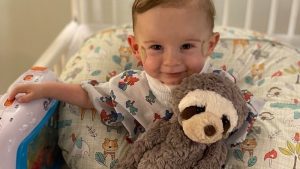 Cincinnati Zoo & Botanical Garden will memorialize Oliver Nicholson, who passed away earlier this year and would have been two years old today, by renaming its sloth habitat “The Oliver Nicholson Memorial Sloth Habitat”.

“Oliver and his twin, Atticus, were born on October 11, 2019, seven weeks premature,” said Alex Nicholson, Oliver’s father. “Oliver was diagnosed with VACTERL association and was in and out of Cincinnati Children’s during his short life. We gave him a stuffed sloth during one of his hospital stays which he adored and slept with every night.”

After learning that Cincinnati Zoo’s sloth was pregnant, the Nicholson family started a petition to name the baby Oliver. Sadly, the Zoo never got to discuss names for the baby sloth, announcing yesterday that it was delivered stillborn.

“We had been in c 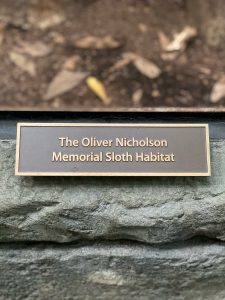 ontact with the Zoo and had discussed other ways that we could honor Oliver,” said Nicholson. “This tribute will be lasting and means so much.   It gives us a huge bright spot on an especially difficult day and some positive news to share with the 80,000 people who signed our petition.”

Lightning, the mother of the sloth baby, is currently in the Zoo’s Animal Ambassador Center (AAC) but will likely be reunited with Moe, her 22-year-old companion, in The Oliver Nicholson Memorial Sloth Habitat at some point in the future.

« Excitement for Sloth Birth Comes to a Sad End at the Cincinnati Zoo
Cincinnati Zoo’s Spooktacular HallZOOween Kicks Off this Weekend! »