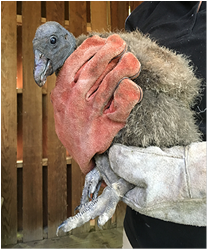 CINCINNATI (July 29, 2016 ) – The Cincinnati Zoo & Botanical Garden is excited to announce that a rare Andean condor chick has been spotted with adults Gryph and Laurel. This is the first chick of this species to hatch in Cincinnati in 30 years and only the fourteenth to hatch in North American institutions in the past decade.

They are a naturally slow breeding species (averaging one chick every other year). “This is mostly because the chick stays dependent on both parents longer than other bird species,” said Kim Klosterman, Senior Aviculture Keeper at the Cincinnati Zoo.  “Andean Condor chicks will not attempt to leave the nest until they are close to six months of age.”

The Zoo’s condor pair has been laying one egg per year since 2008 but did not produce a chick until now! The success may have something to do with the installation of a nesting chamber in 2014. The 300-pound box, built by Zoo volunteers, was designed to provide a more secure, cave-in-a-cliff-like environment for the birds.  (related blog – Creating a Condor Condo)

“The chick, a female, is about six weeks old and appears to be growing at a normal rate,” said Klosterman, who was able to pull the chick for a quick exam last week. “It’s difficult to get a good look inside the nest box, but we know that the food we put in there has been disappearing quickly.  In fact, we recently increased the condors’ usual diet (which includes rodents, rabbits, goats and fish).”

The Association of Zoos & Aquariums’(AZA) Species Survival Plan (SSP) will determine the chick’s future.  She will remain here in the condor exhibit with her 34-yr-old parents until the SSP decides to send her to another facility for breeding or to Cincinnati Zoo’s off-site facility to be conditioned for release into the wild.

The Cincinnati Zoo has participated in conservation efforts and the AZA’s breeding program for this endangered species since 1989 and operates a staging site for North American-hatched Andean condors destined for release.   In the summer of 2013, a breeding pair was moved from the Zoo’s staging facility to Colombia, where they were released and, soon after, produced chicks. “When they reproduce, that tells me that we are doing something right.  That’s the gauge of success,” said Klosterman.

Andean condors, a type of vulture, typically stand around four feet tall and can weigh as much as 33 pounds. Thanks to its massive wingspan of 10.5 feet, this species can rightly claim the title of the largest flying land bird in the Western Hemisphere. They are currently listed as Endangered by the U.S. Fish and Wildlife Service and Threatened by the International Union for Conservation of Nature.