First black rhino born at the Cincinnati Zoo since 1999

After what seems like a very long wait (a 15-month gestation period), Cincinnati Zoo & Botanical Garden’s eastern black rhino Seyia gave birth to a healthy calf named “Kendi” yesterday morning at 5:05 after about 30 minutes of labor.  Surveillance cameras inside the rhino barn recorded the birth and mom and baby’s first moments.

“Every rhino calf born is incredibly important for the population, which includes fewer than 60 in North America. Calves will stay with their mothers for 3- 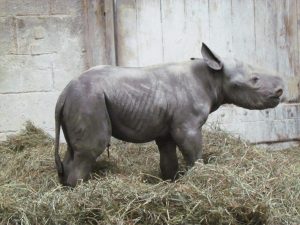 4 years which means that the average female can only have one calf every 5 years,” said Christina Gorsuch, curator of mammals at the Cincinnati Zoo.  “This calf is only the fifth eastern black rhino born in the last two years in North America. Only one surviving calf was born in 2014/2015.”

The rhino care team is keeping their distance from Seyia and Kendi during this critical bonding period, so they have not yet been able to determine the calf’s sex. The staff voted to name the calf “Kendi,” which means “the loved one” in Swahili.

Eastern black rhinos, native to Eastern and Central Africa, have two large horns made of keratin that they use for defense, intimidation, and feeding. An adult can weigh anywhere between 1,760 and 3,080 pounds, and newborns (calves) weigh between 73 – 121 pounds. The species is Critically Endangered due to poaching and habitat loss.  Fewer than 5,000 black rhinos remain in the world, and approximately 60 are managed by the SSP in North American Zoos.

The public will be able to see Kendi and Seyia in their outdoor habitat in a couple of weeks, weather and health depending.  Dad, Faru, will be out daily. Black rhinos are solitary animals, so there are no plans to unite the three.  Look for updates on the calf’s progress on CincinnatiZoo.org and on Facebook, Instagram, Twitter and Snapchat.