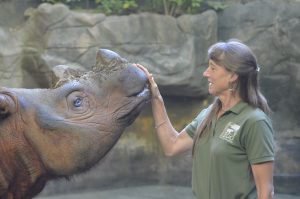 CINCINNATI, OH (September 20, 2021) — The Center for Conservation and Research of Endangered Wildlife (CREW) at the Cincinnati Zoo & Botanical Garden is teaming up with five partner research facilities to form the American Institute of Rhinoceros Science (AIRS) – a model for saving species with science ex situ, which means off site or outside natural habitat. This new initiative was made possible by a National Leadership Grant from the Institute of Museum and Library Services (IMLS).

“By bringing together a diverse team of the brightest minds in rhino science, I am confident that we can overcome the challenges to sustaining thriving rhino populations within our nation’s zoos,” said Dr. Terri Roth, Vice President of Conservation and Science and Director of CREW.

The team, which includes collaborators from The Wilds, Disney’s Animal Kingdom®, George Mason University, the South-East Zoo Alliance for Reproduction & Conservation, and Stellenbosch University, South Africa, will focus on the high priority research needs of rhinos in accredited facilities that were identified by the Association of Zoos & Aquariums’(AZA) Rhinoceros Research Council in 2019. These priorities are: 1) physical fitness and its relation to health 2) iron storage in browsing rhinos, 3) reproductive success, and 4) behavioral and environmental factors that can maximize rhino well-being.

“The International Rhino Foundation (IRF) applauds the commitment and efforts of these individuals and organizations working to save the five species of rhinos,” said Nina Fascione, IRF’s executive director. “Furthering the understanding of these magnificent animals is essential to their survival, and we look forward to applying the knowledge gained to populations in the wild for the benefit of future generations.”

“The establishment of AIRS is in and of itself a transformative approach to ensuring the best care of animals in our zoos; in short, the whole is greater than the sum of its parts when it comes to solving wildlife scientific challenges,” said Roth.

AIRS recognizes that the four research priorities that it will address are inter-related and should not be studied in isolation. The scientists will, over three years, conduct research within each pillar on overlapping subjects and examine the effect across all pillars.  Data collected from all studies will be compiled in a centralized database accessible to all AIRS members.

“This kind of close collaboration, transparency, and data-sharing is uncommon in the scientific arena, but cross-study analyses are essential for maximizing what can be learned from multidisciplinary, multi-institutional research in which unanticipated discoveries could provide the most valuable answers,” said Roth.

Ultimately, AIRS will provide affordable and feasible management recommendations to veterinarians and animal care staff at the 74 AZA facilities caring for rhinos. Managed rhino populations are becoming increasingly important in light of the tremendous illegal poaching pressures on wild rhinos.  Rhinos are poached for their horns which are used in Traditional Chinese Medicine and also as a status symbol of wealth and success in some Asian cultures.

“Accredited zoos are committed to saving wildlife from extinction while providing the highest standard of animal care.  AIRS will set a precedent for saving species in zoos with science, a model with value for all zoo species at risk in the wild,” said Roth.