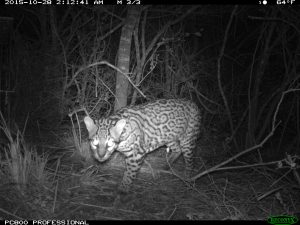 Scientists in Texas and Cincinnati harvest hope for endangered species

CINCINNATI, OH (July 20, 2021) — Thanks to the efforts of scientists and veterinarians in multiple states and facilities, a wild Texas ocelot may have the opportunity to become a new kind of father – just months after his untimely accidental death. Quick action by the Laguna Atascosa National Wildlife Refuge (LANWR) in South Texas, part of the United States Fish and Wildlife Service (USFWS), and the Gladys Porter Zoo, following a vehicle strike that killed a 9-year-old male ocelot, made it possible for scientists at the Cincinnati Zoo & Botanical Garden’s Center for Conservation and Research of Endangered Wildlife (CREW) to collect viable, and valuable, genetic material. “We knew that any chance of success depended on collecting the cat and getting the sample to the Cincinnati Zoo as absolutely fast as possible,” said USFWS Wildlife Biologist, Dr. Hilary Swarts.

“It’s just incredible that we were able to obtain such a high-quality semen sample from a wild cat hit by a car in Texas 36 hours before,” said Dr. Bill Swanson, Director of Animal Conservation Research at CREW.  “Only 60-80 individuals are estimated to remain in their native Texas habitat, so the importance of this sample, and the hope that it represents for the species, cannot be overstated.”

The collaborators won’t have to wait long to find out if their efforts paid off. CREW will be using the deceased ocelot’s semen for an artificial insemination (AI) procedure at the ABQ BioPark in Albuquerque on July 28th.   If the AI succeeds and offspring are born this October, it will be the first time that kittens have been produced with frozen semen from a wild ocelot. 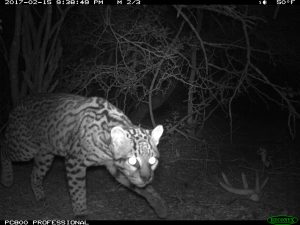 Dr. Hilary Swarts, a wildlife biologist with the USFWS, was notified early in the morning of May 18th that a male ocelot had been hit by a car just south of the Refuge.  Dr. Swarts quickly located the deceased cat, a 9-year-old male, that had been studied at LANWR and fitted with tracking collars on three separate occasions over the preceding eight years.  Working against time and rising ambient temperatures, Dr. Swarts placed the ocelot’s body in an ice chest and transported him to the nearby Gladys Porter Zoo in Brownsville.  With the assistance of Senior Zoo Veterinarian, Dr. Thomas deMaar, the testes were removed and chilled with ice packs for overnight shipping to the Cincinnati Zoo & Botanical Garden.  The following morning, at ~36 hours after the male’s death, the shipment arrived at CREW where Dr. Bill Swanson processed the tissues for sperm recovery.  Amazingly, the recovered semen sample exhibited excellent survival (~60% motility) and a total of ~250 million motile sperm were recovered for cryopreservation.  Dr. Swanson froze 20 semen straws, each containing enough sperm for a single artificial insemination (AI) procedure.

Although this ocelot’s demise was tragic, the quick actions in recovering his body and processing his semen after death may have given him a second lease on life.  Over the past 25 years, CREW has been focused on developing and applying assisted reproduction for the conservation management of ocelots and other endangered felid species.  To date, nine ocelot pregnancies have been produced within zoos following AI, including three litters from frozen-thawed semen.  As part of an ongoing collaborative effort involving CREW, USFWS, Gladys Porter Zoo, Texas A&M University, University of Tennessee and East Foundation, application of these reproductive technologies is being explored to assist with the conservation of wild Texas ocelots – a fragmented, highly endangered population consisting of just 60-80 individuals.  If the AI at the end of this month is successful, the offspring will help to broaden the genetic diversity of ocelots managed in zoos by the Association of Zoos and Aquariums’ Ocelot Species Survival Plan while demonstrating, for the first time, the feasibility of producing kittens using frozen semen from the imperiled Texas ocelot population.  Further refinement of scientists’ capacity to create genetic exchange between wild and zoo-based ocelot populations or among wild ocelots living in fragmented habitats will help to ensure their continued survival into the future.