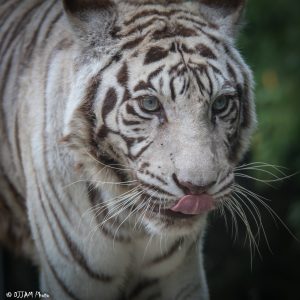 The last white tiger at the Cincinnati Zoo was euthanized today

CINCINNATI (June 21, 2018) –  Popsy, the remaining white tiger at the Cincinnati Zoo & Botanical Garden, was euthanized today due to age-related issues. The average lifespan for a tiger is 15-20 years. The 22-year-old rare white tiger was the oldest of her kind in any accredited North American Zoo.

“The animal health staff has been closely monitoring Popsy’s medical condition over the past several months,” said Dr. Mark Campbell, Director of Animal Health. “As a geriatric tiger she had several health issues we were managing and treating. The animal health and care staff collaboratively concluded that we were unable to continue to maintain her good quality of life.”

Cincinnati Zoo veterinarian and animal care staff work closely to make sure all animals at the Zoo receive the best possible care, whether they’re young or old. The animal care staff does everything possible to make our animals comfortable in their golden years, including providing special diets, habitat modifications and specialized medical attention. The white tiger habitat had been modified with ramps and a shallow section in the pool to allow easier access for the aging animal.

“Popsy was a great animal ambassador for her species for more than two decades and a favorite with our Zoo guests,” says Mike Land, Team Lead at Night Hunters and one of Popsy’s caregivers. “For the last 12 years she was the “Queen of Cat Canyon” and she let the other tigers know it. Her presence will be greatly missed.”

Popsy arrived in Cincinnati from Nashville in June 1996. Popsy and her sister Erica were named after the late Erich Kunzel, Conductor of the Cincinnati Pops, and a large supporter of the Cat Ambassador Program. She spent the last ten years with male companion Akere, who passed away in December 2017. The white tiger is not an albino – the white coat and icy blue eyes are simply a rare expression of recessive genes. Estimates predict that only one out of every 10,000 tigers will display the striking black and white striped pattern. White tigers have been at the Cincinnati Zoo since 1974 and have been very popular with visitors.

The Cincinnati Zoo is committed to tiger conservation. Wild tiger populations, which numbered over 100,000 only a century ago, have decreased by 97%, with much of that decline happening in the past 10 years. According to the latest estimates, there are only about 3,900 tigers left in the wild on the entire planet. Of all the big cats, tigers are the most endangered. As consumers, we can do our part to protect tigers and their rainforest habitat by choosing products made with certified sustainable palm oil. Visit cincinnatizoo.org for more information on how you can support tiger conservation.