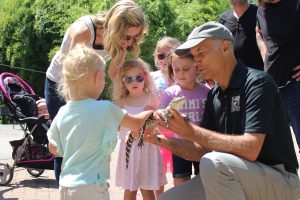 Maynard has shared 855,090 seconds of wisdom about the natural world

“We joke that if you give Thane a minute, he’ll give you 90 seconds,” said Cincinnati Zoo’s vice president of marketing and visitor experience Chad Yelton. “He’s been writing and recording 90-second-long stories packed with interesting, and often obscure, information about animals and plants for the past 35 years and hasn’t come close to running out of things to say.”

More than 9,000 episodes of The 90 Second Naturalist have aired to date on stations across North America and have covered topics such as Turkeys & T-Rex, Gender Bender Bugs, Owl Cell Phones, Fruit Eating Carnivores, and even Whale Snot! Archives are posted on local host station WVXU’s website.

“Conservation is not just about saving pythons, penguins and pandas,” said Maynard. “Our mission at the Zoo is to inspire visitors with wildlife, and I’ve always had a similar goal for The 90 Second Naturalist program.  Protecting the environment protects people, and people will protect things they know and care about.  If a fun fact about an insect sticks in a listener’s head, it might just save it from getting squashed!”

Thane was inspired to start the show after listening to a lecture by E.O. Wilson, the legendary Harvard biologist, in the spring of 1987.  Wilson encouraged his crowd of researchers, professors, and grad students to not only discuss biodiversity with one another but with the whole population.

“Sitting in the back of this standing room only crowd, I realized right then that I would never grow up to be a research scientist, but I knew I could tell stories about animals,” said Maynard.

This year also marks the 45th year of Maynard sharing stories at the Cincinnati Zoo!