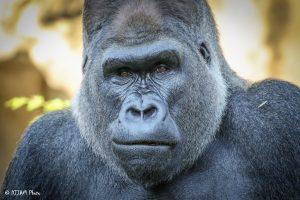 CINCINNATI (March 12, 2022) – Jomo, the beloved Western lowland silverback gorilla at the Cincinnati Zoo & Botanical Garden, passed away yesterday. Since being diagnosed with a degenerative, incurable spinal cord condition in 2019, he has had mobility issues and some close calls. This is a huge loss to the Cincinnati Zoo and his care team.

Read a tribute to Jomo by one of his caregivers.

“Jomo has captured the hearts of countless people over the years, including my own,” said Cincinnati Zoo’s head gorilla keeper Ashley Ashcraft.  “It has been a great honor that I have been able to spend 14 years with the best silverback around. From the first day I spent with him until the last, Jomo had taught me so much about gorillas but also life. He will forever inspire me as I remember him as a great leader for his family and a magnificent ambassador for his species.”

Jomo sired three gorillas during the 17 years that he was at the Cincinnati Zoo. He was also a surrogate dad to Gladys since she was a baby. Weighing in at 400 pounds, he was a big gorilla. 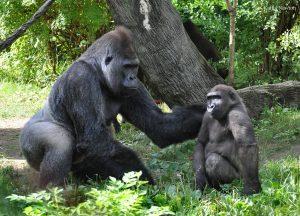 “His size helped him to perform his silverback duties, which included protecting and leading the troop.  He was a big softie when it comes to the kids. He was especially close to Mona, and often came to her defense when there was conflict,” said Ashcraft.

Gorillas are highly social and complex animals. His troop, which consists of 9-year-old Gladys, 7-year-old Mona and 6-year-old Elle, among others, will be closely monitored and be given extra care and attention from their care team in the coming days.

“We have been monitoring and treating Jomo’s condition for years, including regular physical therapy sessions, medications and laser therapy,” said Ashcraft.  “The last few years of his life as his health started to decline, I cherished our bond even more. I can’t begin to explain how grateful I am for each gorilla caregiver, veterinarian/vet tech, as well as a slew of other experts that helped give him the best possible care.”

In 2011 the Cincinnati Zoo, The Christ Hospital and Toshiba teamed up for a preventative study to perform an awake cardiac ultrasound (also known as an echocardiogram or an echo) on Jomo. To date, heart disease is the #1 cause of mortality in zoo gorillas. The data the Zoo was able to collect is valuable cardiac data that aids nationwide scientific research.

A necropsy – a procedure to determine the cause of an animal’s death – will be performed this weekend. Results from the necropsy may not be available for days, if not weeks.

The Cincinnati Zoo has been caring for gorillas since 1931 and has made significant contributions to gorilla populations in Zoos across the country.  There are about 765 gorillas in zoos worldwide including approximately 360 that are managed by the Gorilla SSP. Western lowland gorillas are critically endangered in the wild, with fewer than 175,000 individuals. Due primarily to habitat destruction caused by logging, mineral mining and agricultural expansion, wild gorilla numbers continue to shrink.  The bushmeat trade – the killing of wild animals to be used as human food – is also a major threat to the western lowland gorilla population throughout the Central African rainforests.  More than 1,000 gorillas are illegally poached for the bushmeat trade each year.