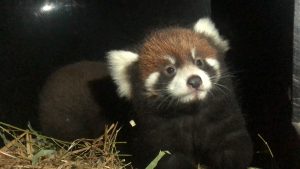 CINCINNATI (August 31, 2018) –  Red panda cubs born at the Cincinnati Zoo & Botanical Garden in June are almost ready to venture into their outdoor habitat and may be visible in the next few weeks.  And, those won’t be the only cubs people will see this year if crossed fingers and toes and hormones work.  To prepare for possible polar bear cubs, the Zoo is moving forward with plans to expand the polar bear habitat.

“We’re thrilled about the red panda cubs and have high hopes, based on breeding activity and behavioral observations, that we’ll have good news to report about Anana, our female polar bear, later this fall,” said Cincinnati Zoo Director Thane Maynard.  “There’s no pregnancy test for this species, so we have to proceed as if cubs are on the way.  Making room for additional denning space is just one measure.  We’re also keeping activity and noise in the area to a minimum for the next few months.”

It has been more than 25 years since the Zoo has had polar bear cubs.  Its breeding success with red pandas, however, is on the other end of the spectrum.  Cincinnati Zoo leads the world in red panda births for the fulgen Styani subspecies, having produced a total of 88 cubs, including the two born in June to experienced mom Lin and first-time dad Kola. 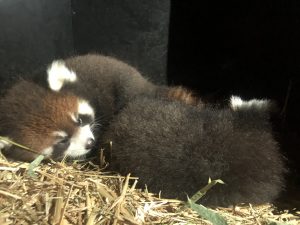 “Red pandas and polar bears are both delayed implanters, so the only way to confirm pregnancy for these species is via ultrasound,” said Dr. Erin Curry, reproductive physiologist at Cincinnati Zoo’s Center for Conservation and Research of Endangered Wildlife (CREW).  “We were able to accurately predict the birth date for the red panda cubs using ultrasound and hope to get a clear image of a polar bear fetus at some point.”

Since the polar bear area is now a quiet zone and not a good place for jackhammers and noisy machinery, a timeline for the full polar bear habitat expansion hasn’t been determined.

The polar bear renovation is part of the Zoo’s vision for the future, which aims to dramatically enhance habitats and provide animals with More Home to Roam.  To make more space for the polar bears, and potential additions to their family, the Zoo’s North American black bears have moved to a new home in Colorado along with two of the three African lions that were born at the Zoo almost four years ago.

“We’re committed to giving animals more home to roam.  Our African lion habitat was great for two adults and three cubs but not ideal for five fully-grown lions, especially when four females are of breeding age,” said Cincinnati Zoo Director Thane Maynard.  “This move gives the lions remaining here, John, Imani and Kya, plenty of space and allows the other two, Uma and Willa, to stay together.”

The Zoo kicked off its More Home to Roam capital campaign earlier this summer, with a goal to raise $150 million to dramatically enhance animal habitats and greatly improve the visitor experience. Making more space for lions and polar bears is part of a seven-year master plan that also includes a new elephant habitat that will give the gentle giants five times more trunk space!