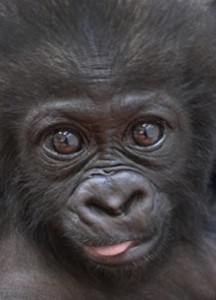 Gladys, who turned six yesterday, was the orphaned gorilla that came to the Cincinnati Zoo in 2013 at 1 month old to find a foster mother as recommended by the Gorilla Species Survival Plan (GSSP), the body that oversees the 350 gorillas living in North America. Cincinnati was chosen based on its vast experience with baby gorillas, to date enjoying 50 gorilla births.

“It’s hard to believe that Gladys is already six,” said Cincinnati Zoo Curator of Primates Ron Evans, who led the team of expert surrogate human parents that cared for baby Gladys 24/7 until she was big enough to be placed with her surrogate gorilla mom. “At 4 ½ months, Mlinzi took over Gladys’ fulltime care and has guided her through many life lessons as only a mother gorilla can. She’s been a great mom and has helped Gladys reach this milestone age. Gladys is now called a sub-adult, or a teenager by human standards. So rather than a sweet sixteen, gorillas have a sweet sixth birthday.” 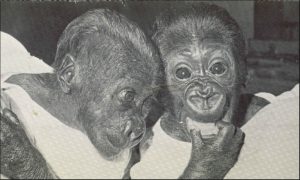 Samantha, the matriarch of Cincinnati Zoo’s family group, was one of the first two gorillas born at the Zoo and is named after Good Samaritan Hospital because its neonate team helped with her early care.   She is a mother, a grandmother, a great grandmother, and Gladys’s great aunt!

“She still shares her superb mothering skills by fostering “Elle,” the 50th gorilla born at the Zoo,” said Evans. “At 49, the Grand Ol’ Lady maintains her status as the oldest mammal at the Zoo.  Gorillas can live longer in Zoos than in the wild, with the record being an amazing 62 years old.  We hope she’ll live that long!”

Gorilla World’s indoor habitat, which opened last year, allows visitors to see gorillas year-round.  Gorilla World has been closed to guests for some off-season improvements but will reopen this weekend.  Visitors can see Samantha, Gladys, Elle, Mlinzi, Jomo, and the whole gang daily from 10 a.m. to 5 p.m., and admission is half price now – March 8! Click here to purchase tickets.

There are about 765 gorillas in zoos worldwide including approximately 350 that are managed by the GSSP. Western lowland gorillas are critically endangered in the wild, with approximately 300,000 individuals in the declining population. Due primarily to habitat destruction caused by logging, mineral mining and agricultural expansion, wild gorilla numbers continue to shrink.  The bushmeat trade – the killing of wild animals to be used as human food – is also a major threat to the western lowland gorilla population throughout the Central African rainforests.  More than 1,000 gorillas are illegally poached for the bushmeat trade each year.