CINCINNATI, OH (January 21, 2016) – One of Cincinnati Zoo & Botanical Garden’s most beloved and charismatic animals has died.  Fifteen-year-old Sahara (aka Sarah), the world’s fastest land animal, was euthanized yesterday by the Zoo’s vet staff due to a diminishing quality of life.  The average lifespan of a cheetah is eight to twelve years.

“She lived a full life and was a phenomenal ambassador for her species,” said Linda Castaneda, Lead Trainer for the Cincinnati Zoo’s Cat Ambassador Program. “Sarah was the queen bee around here.  She had a very expressive face that communicated what she wanted. And we obliged. She was a dynamic individual and we were privileged to know her and learn from her.  We will all miss the princess cat.”

Sarah came to the Cincinnati Zoo when she was only six weeks old and was hand raised by Cathryn Hilker, Founder of the Zoo’s Cat Ambassador Program. She was one of the first cheetah cubs to be raised with a puppy companion, a common practice today, an Anatolian shepherd named Alexa.

While Sarah had various trainers throughout her time at the Cincinnati Zoo, her favorite human by far was the woman who raised her, Cathryn Hilker.   “Anyone who saw them together could see their unique relationship,” said Castaneda. “Sarah would often challenge her trainers when asked to do a task but she would fulfill any request made by Cathryn.  It was an exceptional relationship, one that every keeper and trainer hopes to have with animals in their care. Even in her retirement from the Zoo, Cathryn continued to be a constant in Sarah’s life, visiting her earlier this week to say her goodbyes.” 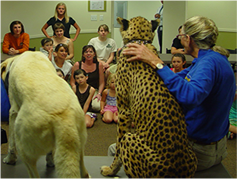 As a cat ambassador, Sarah visited hundreds of schools and thousands of students during the last decade and a half to raise awareness of the plight of the cheetah.  At the Zoo, she showed drop-jawed visitors just how fast a cheetah can run!

Sarah was a well-known cheetah around the Cincinnati area and around the world. She was featured in magazines, print and even a local Metro commercial, but her claim to fame is being the fastest cheetah in human care in the world!

During the filming of a National Geographic cheetah special in 2012, Sarah ran 100 meters in 5.95 seconds, beating her previous world record of 6.13 seconds set in 2009.  That’s more than 3 seconds faster than the world’s fastest man, Usain Bolt of Jamaica, whose fastest time for the same distance is 9.58 seconds.  Sarah’s top speed was clocked at 61 mph.

Cheetahs are built for speed.  Their flexible spine allows their front legs to stretch far forward on each stride, covering 20 to 22 feet in one stride, about the same distance as a racehorse. Cheetahs are off the ground more than half of their running time! Their claws are hard and sharp like cleats, giving them great traction when they run.

Cheetahs are endangered, and their population worldwide has shrunk from about 100,000 in 1900 to an estimated 9,000 to 12,000 cheetahs today. The Cincinnati Zoo has been dubbed “The Cheetah Capital of the World” because of its conservation efforts through education, public interpretation, and the cheetah breeding program. The Zoo’s Regional Cheetah Breeding Center is one of only four similar facilities in the United States managed by the Species Survival Plan. In total, there have been 73 cheetah cubs born in Cincinnati.

Since 1980 the Cincinnati Zoo’s “Cat Ambassador Program” has taken African cheetahs to schools and programs around the U.S, Canada, and Central America to spread the word that cheetahs are running for their lives.  In addition, each summer the Zoo takes 22 school teachers to the Cheetah Conservation Fund’s headquarters in Namibia for a two-week conservation field study. Since 1990 the Cincinnati Zoo’s “Angel Fund,” named after our first cheetah ambassador, “Angel,” has directly supported cheetah conservation in Africa.  From South Africa and Namibia in the south, up through Kenya and Tanzania in East Africa, The Angel Fund has contributed more than $1 million in support for cheetahs in the wild.