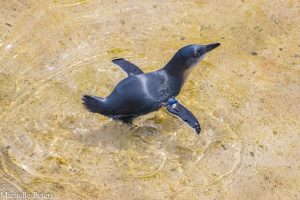 CINCINNATI, OH (May 21, 2021) — Four-month-old Mars and Rover have joined Cincinnati Zoo & Botanical Garden’s little blue penguin colony after a long journey to become ambassadors for their species. With that mission now accomplished, thanks to TLC from the Zoo’s tireless bird team, visitors can see them swimming in their new home in Roo Valley.

“The process of raising these chicks is long and involves hand feeding them six times a day, weaning, plate training, swim lessons, and exposing them to new sights and sounds,” said Cincinnati Zoo’s bird team head keeper Cody Sowers.  “Colony introductions take time and patience.  We put them with younger members of the group first and add more individuals to the mix until they’re ready to join the full colony.”

Cincinnati Zoo has the largest colony of little blue penguins in North America.  Most of the 30+ penguins have food or car themed names, like Pierogi and Edsel. Mars and Rover, however, hatched right before NASA’s Rover landed successfully on Mars.  The bird team decided that this event was big enough to break the normal naming conventions.  They made an exception once before when they named a penguin that hatched on David Bowie’s birthday Bowie.

“Mars and Rover hatched one day apart and have been raised together and introduced to the same things at the same time,” said bird team head keeper Rickey Kinley. “But their personalities are so different!  Rover is more of a people penguin, and Mars prefers to spend his time swimming!”

The bird team just found out that Mars is a boy and Rover is a girl.  It’s not clear if that factors into their preferences, but the Zoo has technology that can help it gather data to compare swimming, social, and other behaviors by sex and other criteria.  Radio frequency technology (RFID) developed by Tracks Technology was built into the little blue penguin habitat, which opened last summer, to collect swimming frequency data and was recently used in a University of Cincinnati Hobson Lab research project to look for evidence of “leaders” & “followers” in the colony.

Mars and Rover had not yet joined the colony when that study was done, but visitors can keep an eye on them to see if they lead or follow!  You can identify them by colored bands on their wings.  Mars’ band is made of green and red beads, and Rover’s is blue.  Since they’re new swimmers, they will likely stay closer to the surface.

The little blue penguin habitat is in Roo Valley. Masks are required in that area, so remember to pack one if you want to see Mars and Rover!  The Cincinnati Zoo opens daily at 10 a.m. Reservations are required. For more information, visit www.cincinnatizoo.org.