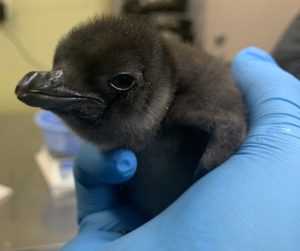 CINCINNATI (January 10, 2019) – The Cincinnati Zoo & Botanical Garden asked Facebook and Instagram followers to suggest and vote on names for the little blue penguin that hatched on New Year’s Eve.  The winner was “Pierogi”, but the bird team liked the runner up name, “Toast”, so much that they are going to give that name to a second chick that hatched 12/28/19.

“We usually follow a theme when choosing names for certain species, and the little blue penguin theme is food and drink,” said Cincinnati Zoo’s associate curator Jennifer Gainer. “Since the chick being named was born on New Year’s Eve, we got a lot of suggestions like Champagne, Dom, Bubbly, etc…  We really liked Toast.”

Cincinnati Zoo is home to the largest colony of the smallest penguin species, due in large part to the husbandry expertise of the Zoo’s bird staff.  There are more than 30 birds in the colony.  The young chicks will be introduced to the adults when they are about six weeks old.

The little blue penguin colony will be moved to a new and improved home in Roo Valley, one of the first projects that will be funded by its More Home to Roam capital campaign, next year.  In the new habitat, visitors will get a close, underwater view of the charismatic penguins swimming!