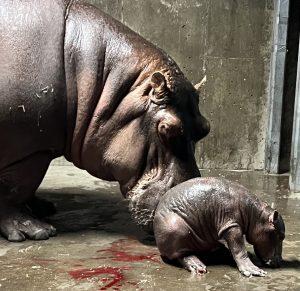 CINCINNATI, OH (August 4, 2022) — Right around April Fool’s Day earlier this year, Cincinnati Zoo & Botanical Garden staff members were informed that 23-year-old hippo Bibi was pregnant. Since she was on birth control, most assumed that the news was a joke! The appearance of a healthy, full-term hippo baby last night around 10 p.m. confirms that a) the hippo team was not joking, and b) baby hippos are adorable!

“This calf looks huge to us because Fiona, Bibi’s first baby, only weighed 29 pounds when she was born six weeks premature and wasn’t able to stand on her own. This new calf weighs at least twice as much as Fiona did and is already walking,” said Christina Gorsuch, Cincinnati Zoo’s director of animal care. “We’re not sure if nursing has occurred yet because the water is murky.  It’s Bibi’s first time nursing, since Fiona had to be cared for by the hippo staff, so we’re keeping a close eye on them to make sure we don’t need to step in.”

The hippo team noticed a difference in Bibi’s behavior the morning of August 2 and the Zoo shared the news that she was showing signs consistent with being in labor.  She was restless outside and then wanted to go inside and stay there.

The team had to step in when Fiona was born six weeks premature and too small and weak to reach Bibi to nurse. They were hoping that history would not repeat itself, and it appears that it has not.

“Bibi and the baby, yet to be named, will spend the next two weeks bonding behind the scenes,” said Gorsuch.  “A female would take her newborn away from the bloat for about that amount of time in the wild, and we try to give Bibi the choice to do what feels natural to her.”

Five-year-old Fiona and 19-year-old Tucker are happy to hang out with each other and stay out of Bibi’s way while she bonds with the new calf. Keepers have been separating them from Bibi periodically over the past weeks to get them used to being a duo.  They’re so comfortable with each other now that 2000-pound Fiona has been seen napping on 4500-pound Tucker.

Mom and baby will not be visible to the public right away, but the Zoo will share photos and videos if the care team is able to get them without disturbing them.  Tucker and Fiona will be in the outdoor habitat as usual except during key introduction times.

Zoo members have access to live cams in the outdoor habitat and can watch the action in Hippo Cove from 8:30 a.m. – 5:30 p.m. daily.  Access to the live hippo cams is also available to Virtual Members.  NOTE: Cameras may not be on during introductions or when the animal team needs private access.