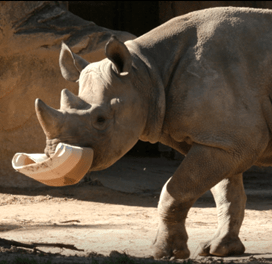 Cincinnati Zoo & Botanical Garden’s female black rhino Seyia is curious but careful, whereas her 2-year-old calf AJ is bold and playful, according to a “novel object” temperament test performed at the Zoo recently as part of a large collaborative national rhino study led by the American Institute of Rhinoceros Science (AIRS). The Zoo’s Center for Conservation & Research of Endangered Wildlife (CREW) is helping to lead the AIRS charge using science to improve the lives of rhinos in North American Zoos, and this temperament test data will be used by the AIRS Well-being Pillar scientists to determine which individuals are better suited for certain environments and stimuli, including reintroductions/translocations, and serving as animal ambassadors.

“I think we can all relate to the fact that every animal has a unique personality. Because of those personality differences, we cannot assume that one style of management fits all animals in human care,” said Associate Professor of Integrative Studies at George Mason University and one of AIRS Well-being Pillar Leaders Dr. Elizabeth Freeman. “A novel object test is one of the tools we can use to assess an individual animal’s personality/temperament. The way an individual responds to a unique (novel) situation can tell us how bold or shy they are, how timid or anxious and even how much of a risk taker they are.”

In addition to advancing the science of rhino husbandry, the AIRS mission includes training the next generation of rhino conservation scientists.  Therefore, scientists in all stages of their training/careers are a part of the program.  The temperament study was performed by graduate students Emily Bach and Drew Arbogast who worked closely with the Cincinnati Zoo’s rhino care team.

The team noted that performing the test with mom and calf together introduced another variable, which is why it will be important to replicate the testing in multiple environments with a wide variety of individuals.  “It’s going to take a lot of institutions, a lot of keepers, a lot of researchers, and a lot of time to get this information,” said senior rhino keeper Kelly Carpenter. She added that the potential positive impact is worth the effort.

The AIRS partnership, which was formally announced in September of 2021, is being led by expert rhino scientists from six organizations and was made possible by a National Leadership Grant from the Institute of Museum and Library Services.

“In addition to studying and enhancing rhino well-being, the AIRS project goal is to produce science-based, affordable and feasible management recommendations for monitoring and controlling physical condition, iron overload, and reproduction ex situ (outside of their habitat of origin),” said Dr. Terri Roth, Director of CREW, Director of AIRS, and the scientist whose research led to the first successful breeding of a Sumatran rhino in more than a century. Given the worldwide poaching crisis that threatens wild rhinos, we must ensure rhino populations in human care are thriving because they serve as an insurance population for their struggling wild counterparts.”

AIRS is led by a coalition of expert rhino scientists and is founded on the partnership between CREW (with its renowned Rhino Signature Project), and The Wilds (one of the most successful rhino breeding and management facilities). This large coalition employs a multidisciplinary, integrative strategy to overcome the four greatest scientific challenges to sustaining rhino populations within our nation’s zoos. The team recognizes that the scientific challenges are interrelated and studying one of them in isolation will fall short of what could be achieved by tackling all of them together. In short, the whole is greater than the sum of its parts. AIRS consists of a diverse, inclusive team of scientists in all stages of their training/careers. This program will set a precedent for saving species with science in zoos, a model with value for all species at risk in the wild. (AIRS is supported by a grant from the Institute of Museum and Library Services #MG- 249011-OMS-21.)

The world-famous Cincinnati Zoo & Botanical Garden is committed to inspiring visitors to care about wildlife and wild places.  It was voted the #1 Best Zoo in a USA TODAY reader poll and has also received rave reviews from Child Magazine, Parents Magazine, USA Today and TripAdvisor.  Over 1.8 million people visit the Zoo’s award-winning habitats, 400 animal and 3000 plant species annually. The Zoo, an accredited member of the Association of   Zoos & Aquariums (AZA) for almost 30 years, is internationally known for its success in the protection and propagation of endangered animals and plants and engages in research and conservation projects worldwide. Known as the #GreenestZooInAmerica, the Zoo is doing its part to conserve natural resources that are critical to saving wildlife and its habitats and is committed to greening its daily operations and reducing its impact on the environment with rain gardens, recycled building materials, solar panels and more. The Cincinnati Zoo is a 501(c)(3) nonprofit organization.