Fiona’s little brother, born at the Cincinnati Zoo & Botanical Garden on August 3, will be called Fritz! The hippo care team selected Ferguson and Fritz from thousands of name suggestions and asked the public to weigh in on which they preferred.  Fritz got 56% of the 220K + votes. 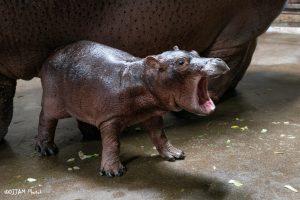 “We would have been happy with either name, but we really think the name Fritz fits this spunky little guy’s personality,” said Cincinnati Zoo’s head hippo keeper Wendy Rice.  “We also thought it was funny that it was suggested because ‘Fritz’ is here due to Bibi’s birth control being ‘on the fritz’.”

The Zoo asked for name suggestions on Monday morning and was overwhelmed by the response.  By Wednesday afternoon, it had received 90,000 suggestions, collected from every U.S. state and more than 60 countries.  There was so much activity on the form that the account reps at Jotform noticed!

“In all my years at Jotform I can’t recall an instance when I witnessed an organization receive that many form responses in such a short time,” said Chad Reid, VP of Marketing & Communications at Jotform. “We’re thrilled that our powerful form software played a small part in Fritz receiving his awesome name.”

Fritz and his mom Bibi are still bonding inside for now, but it won’t be long before the Zoo starts habitat and hippo introductions.  During that time, Hippo Cove may be closed at times and the live cams (available to members and virtual members) turned off.