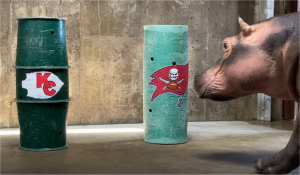 Hippo famous for being an underdog sides with another underdog

CINCINNATI, OH (February 3, 2021) — Cincinnati Zoo & Botanical Garden’s superstar hippo Fiona has made her Super Bowl LV prediction. For the 4th year in a row, she has picked the underdog to win.

“Only one of her three previous Big Game forecasts was accurate, Eagles vs. Patriots in 2018, although there was some controversy as to which team she actually picked last year,” said Cincinnati Zoo director Thane Maynard. “She appeared to vomit on the Kansas City Chief’s logo, which some interpreted as a pick to win and others as the opposite! It was a real toss up!”

This year’s pick was clear.  She sniffed the barrel marked with the Chiefs’ logo and then walked over and knocked down the one with the Buccaneers’ logo.

“It’s not surprising that she always roots for the underdog.  Fiona is here today because she survived against all odds,” said Maynard.  “She was born prematurely and actually looked like a football!  Thanks to our animal care team and the support of the entire Cincinnati community, she pulled through and is a healthy, happy hippo today!”

The Zoo opens daily at 10 a.m.  Enjoy discounted admission during Penguin Days, now through March 12. Reservations are required and masks must be worn while at the Zoo. For more information, visit www.cincinnatizoo.org.

« Cincinnati Zoo Brings the Zoo to You Via Special Winter Home Safari Series
Snow Day! Zoo will Open at 12pm »