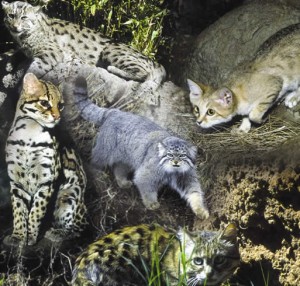 The Lindner Center for Conservation and Research of Endangered Wildlife’s (CREW) world-renowned scientists form critical partnerships with other leading conservationists and governmental and non-governmental organizations to achieve CREW’s mission to Save Species with Science®.

Of the 37 wild cat species in the world, 28 are small in size, weighing less than 50 lbs. Many of these small cats are threatened with extinction in the wild but have received little conservation attention compared to the larger cats. The Association of Zoos & Aquariums (AZA) has established breeding management programs for several small cat species including the ocelot, fishing cat, Pallas’ cat, black-footed cat, and sand cat. Concerted, collaborative efforts of zoos and other conservation organizations will be necessary if small cats are to survive and thrive in both the wild and in zoos.

As a global leader in cat conservation, the Cincinnati Zoo maintains a diverse felid population, including all five of the above-mentioned small cat species. CREW scientists study the reproductive biology of all five small cat species to optimize zoo propagation and develop assisted reproductive technologies for population management. CREW uses tools such as fecal hormone analysis and semen collection to characterize basal reproductive traits in small cats and improve breeding success. This basic  reproductive knowledge also is applied in developing techniques such as sperm and embryo freezing, in vitro fertilization, embryo transfer and artificial insemination to produce viable offspring.

The ocelot, Leopardus pardalis, is considered threatened throughout its natural range. Listed as endangered under the U.S. Endangered Species Act, a small population of ocelots survives in south Texas. The U.S. Fish and Wildlife Service is leading an intensive recovery effort for the Texas ocelot and the AZA has established an Ocelot Species Survival Plan, making it a priority for captive breeding management and conservation. 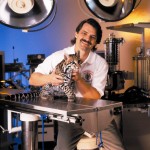 CREW scientists have developed innovative reproductive strategies to assist with ocelot management involving artificial insemination, in vitro fertilization, sperm and embryo cryopreservation and embryo transfer. In 2000, CREW produced Sihil, the first ocelot from embryo transfer and the first endangered cat from the transfer of frozen-thawed embryos.

When behavioral incompatibility prevents natural breeding, CREW may assist reproduction through artifical insemination (AI). To date, AI procedures have resulted in five pregnancies in ocelots, two of which were produced using a new laparoscopic oviductal AI method. With traditional AI methods, the semen is deposited in the uterus, whereas in oviductal AI, the semen is injected directly into the oviducts. As a result, scientists are able to produce pregnancies using fewer spermatozoa or semen of poorer quality, which is always a potential concern in small wild cats.

The Pallas’ cat of Central Asia could be the poster child among small cats for demonstrating the power of science for species conservation. Importation of wild Pallas’ cats from Russia in the mid-1990s as a founder population for North American zoos was followed by frustration in getting these cats to breed and their offspring to survive. Research at CREW and the National Zoological Park established that Pallas’ cats have a pronounced reproductive seasonality controlled by light exposure and that newborns are extremely susceptible to infection with a parasite called Toxoplasma. Improved reproductive and disease management based on these findings has enabled the captive population to grow from 20 cats at seven institutions in 1996 to more than 50 cats in zoos today. Another key to this success was comparative health studies with wild Pallas’ cats in Mongolia. Research conducted by CREW collaborator Dr. Meredith Brown determined that Pallas’ cats are rarely exposed to Toxoplasma in the wild and likely lack strong immunity to this parasite. (Photo: Connie Lemperle)

CREW scientists, in collaboration with a PhD student at the National University of Mongolia, also conducted reproductive evaluations of wild male Pallas’ cats to learn more about their natural reproductive biology and to freeze valuable semen for use with genetic management. In an ongoing study, CREW scientists are using this frozen semen for in vitro fertilization and embryo transfer procedures with Pallas’ cats in U.S. zoos to produce new founders for the captive population (without removing additional cats from the wild).

The first ever Pallas’ cat kittens produced by artifical insemination (AI) were born at the Zoo in 2011 following a laparoscopic oviductal AI procedure conducted at CREW. CREW has worked with Pallas’ cats for the past 15 years, including collaborative research studies with wild Pallas’ cats in Mongolia that involved the collection, cryopreservation and importation of semen from 10 wild males. The recent success of oviductal AI in Pallas’ cats may facilitate the use of this frozen Mongolian semen to introduce new bloodlines into zoos without requiring the removal of additional cats from the wild. (Photo: Shasta Bray)

A small African desert cat, the sand cat is considered Near Threatened on the IUCN Red List of Threatened Species. CREW supports the breeding management of sand cats as it has been selected as a priority species by the AZA. Funding from the Morris Animal Foundation supported CREW’s application of fecal hormone analysis and semen evaluation to characterize basal reproductive traits in sand cats to help zoos to optimize natural breeding.

CREW also collaborates with the Al Ain Wildlife Park and Resort (AWPR) in the United Arab Emirates to improve global genetic management of sand cats. Studies investigate the transport of frozen semen and embryos as a means of creating a genetic exchange. The first sand cats produced by in vitro fertilization and embryo transfer were born in 2009.

With grant funding provided by the Morris Animal Foundation, CREW has characterized the basic reproductive biology of the black-footed cat, using techniques such as fecal hormone analysis and semen collection and evaluation. Semen samples collected from captive cats also were used to assess different methods for cryopreservation as well as the development of in vitro fertilization procedures with frozen semen. This new knowledge should allow us to use the frozen samples from wild black-footed cats in South Africa for in vitro fertilization and embryo transfer with the captive population, producing genetically valuable offspring without having to bring more males into captivity.Perhaps the smallest species of cat, black-footed cats average only three pounds at maturity. Native to the arid regions of southern Africa, the black-footed cat is listed as Vulnerable on the IUCN Red List of Threatened Species.

One challenge with artificial insemination (AI) in felids is properly synchronizing ovarian activity relative to the timing of AI. Recent research has shown that oral progestin can be used to suppress ovarian follicular growth in domestic cats to allow more precise timing of ovarian stimulation. At CREW, our first attempt to use oral progestin treatment in non-domestic felids involved a fishing cat named Ratana that was incapable of natural breeding after losing a front leg to injury. Ratana was fed a small amount of oral progestin daily for one month to suppress ovarian activity and then treated with gonadotropins to induce follicular growth and ovulation.

Laparoscopic AI of both oviducts with freshly collected sperm from the resident male resulted in conception and the birth of a male fishing cat kitten after a 69 day gestation. This kitten was the first non-domestic cat born following the use of oral progestin for fixed time AI, and represents the fifth felid species (fishing cat, ocelot, Pallas’ cat, tiger, domestic cat) produced by CREW with oviductal AI. This new ‘fixed timed AI’ approach could greatly advance our capacity to apply AI for the genetic management of endangered felid species.

The fishing cat is a medium-sized small cat from Southeast Asia listed as Endangered on the IUCN Red List of Threatened Species. The challenges facing the fishing cat’s breeding success in captivity include limited genetic diversity, low founder numbers, and behavioral incompatibility among pairs. Specifically, there is a lack of knowledge pertaining to the framework of successful breeding introductions.