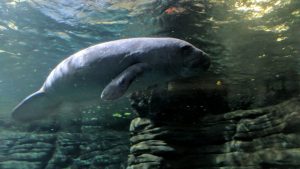 A 250-pound orphaned female manatee has arrived safely at the Cincinnati Zoo & Botanical Garden and will be rehabilitated along with three orphaned males that have called the Otto M. Budig Family Foundation Manatee Springs habitat home for the last six months.  The approximately 1-year-old youngster and her mother were rescued from Florida waters on Monday, April 9, after her mother was struck by a boat.  The mother did not survive.

“Unfortunately, because of boat strikes and weather conditions, SeaWorld has rescued more manatees than they can care for at their facility,” said Dr. Mark Campbell, Cincinnati Zoo’s director of animal health. “We are currently caring for three males, Miles, Matthew, and Pippen, so we could only accommodate one more.”

The little female joined her new companions this morning, and the care team was pleased to observe the four young manatees interacting and swimming together. She will be called Daphne in tribute to the legendary conservationist, Daphne Sheldrick.  The name was chosen by the manatee care staff with help from an Ohio family that recently helped rescue a tiny male manatee while vacationing in Florida.

“Miles and Matthew have been gaining weight and are on track to be released back into Florida waters next winter.  Pippen was smaller when he arrived and is still about 100 pounds lighter than the others, so he will most likely stay another year.  Daphne will be a good companion for him,” said Dr. Campbell.

Columbus Zoo and Aquarium, the only other facility outside of Florida that rehabilitates manatees, is taking two manatees that arrived with the little female earlier this morning. The multi-institution moves represent collaborative efforts by participants of the U.S. Fish and Wildlife Service’s Manatee Rescue and Rehabilitation Partnership (MRP), a program designed to rescue and treat sick, injured and orphaned manatees and then release them back into the wild.  This is the 19th manatee to be rehabilitated at the Cincinnati Zoo.

“We are extremely proud to be part of this conservation program and happy that we could help make the rescued population at SeaWorld more manageable,” said Thane Maynard, director of the Cincinnati Zoo & Botanical Garden. “There’s nothing better than being able to work with these amazing creatures and ultimately see them return to the wild.”

Collaborating to Save Species:

The Cincinnati and Columbus Zoos are the only U.S. facilities outside of Florida to participate in the USFWS’ Manatee Rescue & Rehabilitation Partnership, which began in 1973.  They are second stage rehabilitation facilities that provide temporary homes for manatees until they are ready for release back into the wild.  Since Manatee Springs opened in 1999, the Zoo has welcomed 19 manatees.

The Florida manatee, recently downgraded from endangered to threatened, is at risk from both natural and man-made causes of injury and mortality. Exposure to red tide, cold stress, and disease are all natural problems that can affect manatees. Human-caused threats include boat strikes, crushing by flood gates or locks, and entanglement in or ingestion of fishing gear. As of 2016, the population was estimated to include 6,000 animals.

When to See New Manatees in Manatee Springs:

Manatee Springs will be closed today and tomorrow so Daphne can get acclimated to her surroundings and companions.  Visitors should be able to see the foursome as early as Thursday, April 26, but there’s always the possibility that they’ll be shy and stay out of view.  If that’s the case, they’ll still be visible on a monitor in the Manatee Springs lobby